Skip to content Skip to sidebar Skip to footer

As thousands of people flock to Greyfriars Kirkyard each year to see the final resting place of Greyfriars Bobby the devoted Skye Terrier that the Kirkyard is famous for. They may find themselves walking past these strange cage-like structures half buried in the ground and not giving them a second thought.

These strange contraptions are known as Mort Safes, mort safes were designed in the early 1800’s to stop fresh graves being disturbed and the bodies being removed (a practice that was fairly common) and led to families paying for extra protection on the graves of their loved ones.  Mort safes were cheaper than paying someone to watch over the grave for approximately six weeks or until the remains were no longer deemed fresh.There had long been a demand for fresh bodies by anatomists and medical students 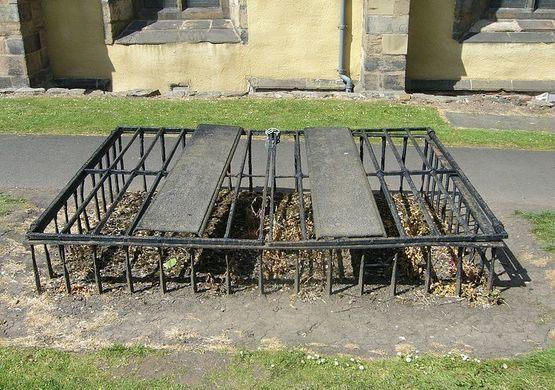 in Scotland and they were usually passed the remains of recently executed felons to forward their medical aims but demand soon outstripped supply and this is when the Resurrection Men came into their own, the Resurrection Men were body snatchers who visited the graves of the recently deceased, dug up the fresh corpses in the dark of night and sold them to medical institutions.

Mort Safes came in many shapes, sizes and designs and were used by more affluent families until in 1832 The Anatomy Act came into force. The principal provision of the act was Section 7 which stipulated that a person having lawful possession of a body may permit it to undergo anatomical examination provided no relative objected. The Act effectively ended the Resurrection Men and seen the use of Mort Safes no longer required as medical institutions could claim the bodies of those who died in workhouses and the like and who had no next of kin.

At its height body snatching was so rife that it led Rev. W. Fleming of West Calder in Scotland to state in 1821 that, “Few burial grounds in Scotland, it is believed, have escaped the ravaging hands of resurrection men; and it is reported that with respect to a church-yard not far from Edinburgh, that, till within three years ago, when the inhabitants began to watch the graves, the persons interred did not remain in their graves above a night, and that these depredations were successfully carried on for nine successive winters.”

Launched Into Eternity: Crime and Punishment, Hitmen and Hangmen By David Leslie